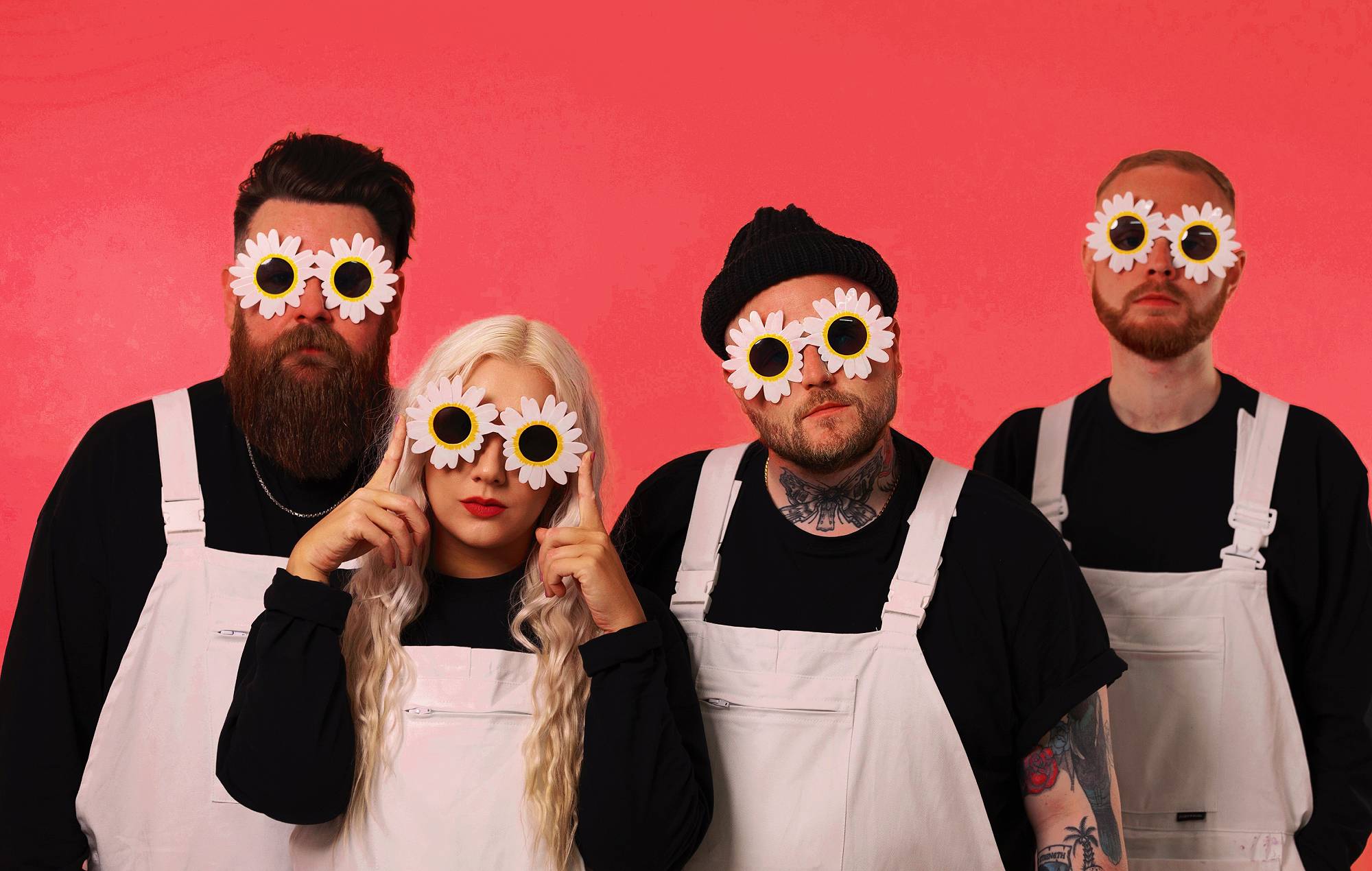 The Lottery Winners have announced details of their third album ‘Anxiety Replacement Therapy’ – featuring Shaun Ryder, Boy George and the Manchester four-piece’s current touring partner, Frank Turner. Check out all details below, along with our interview with frontman Thom Rylance.

Due for release in April, the album was made with their regular producer Tristan Ivemy. The follow-up to 2021’s ‘Something To Leave The House For,’ which reached Number 11 in the charts, the new LP chronicles a year in the life of Rylance, including struggles with his mental health. ‘Anxiety Replacement Therapy’ has been previewed with its opening song ‘Worry’, written when Rylance was at his lowest ebb.

“Writing has always been my coping mechanism to deal with the worst times in my life,” Rylance told NME. “If I couldn’t write songs like ‘Worry’ when I was feeling as bad as I was, that’s when I’d have a problem. Writing songs releases those dark emotions, so it’s healthy for me.”

He continued: “I’ve always told my story in our songs. If you’re telling your own story, it’s never going to be boring. When I started assembling these songs, I realised that every one I wrote was getting a bit lighter, feeling progressively less down. Writing songs really is my anxiety replacement therapy. Once I realised the acronym of ‘Anxiety Replacement Therapy’ is ART, I thought: ‘That’s genius, and it’ll look great on a T-shirt. Let’s have it!’”

NME spoke to Rylance about their rise away from the mainstream, dream collaborators, the singer’s ADHD diagnosis and getting a “bollocking” from Johnny Marr.

NME: Hi, Thom. How are you feeling? Have you stayed in the more optimistic place the album ends on?

Thom Rylance: “I’m a very emotional person, so I’ll always have good and bad times. But generally, I’m in a very good place. The album feels nice, knowing I don’t feel the same way I did when I started writing it. It’s proof things work out and will be OK.”

What can people expect from the new tour in April?

“I have got some ideas I’ve never seen a band do on stage, and I might try some of those. I won’t reveal what they are yet, in case The Lathums nick them. I’d be fuming.”

You worked with Frank Turner on your last album and he’s back on ‘Letter To Myself’. You’re supporting him on tour too. How important is his backing for the band?

“Having his seal of approval is wild. I absolutely adore Frank, as a singer, songwriter, for his attitude and his work ethic. He cares so much about people, making sure his crew were paid during lockdown and raising £250,000 for independent venues. I look up to him musically and ethically.”

You give your younger self advice in ‘Letter To Myself’. What kind of child were you?

“I was a difficult kid. I didn’t fit in or know my place at all and felt a lot of rejection. I was kicked out of primary and secondary school, and I didn’t really know why. I knew I was intelligent, but school didn’t work for me.

“It was because I had ADHD, growing up when the awareness of it wasn’t as good as it hopefully is now. For me, school was: ‘He’s a bad egg, get him out’. I grew up feeling I didn’t fit in, because adults told me I didn’t. ‘Letter To Myself’ is me saying: ‘Actually, you’re going to do good things. Don’t worry, keep being you, because it’s OK to be you. You’ll become proud of yourself’. I’m in the process of getting that diagnosis. It’s so glaringly obvious I’ve got it that I’ve never thought I needed it confirmed.”

You also wrote the song ‘Sertraline’ about taking anxiety medication…

“Before I started taking Sertraline, I was a very tetchy, stressed-out person. I wasn’t good to work with, and I recognised that. I got so worked up that I crashed a van. It was so stupid, and I knew the reason I did it was because my mental health was so poor.

“I knew that, on another day, people could have been really hurt. It was important to do something about it. I’ve always felt emotions so strongly. I feel intensely happy or intensely sad, there doesn’t seem to be a middle. Sertraline helps me reach that middle. I’m not telling anyone to get medicated, but I can say it’s really helped me.”

‘Money’ features Shaun Ryder. He seems a kindred spirit to you. Is that a fair comparison?

“Yeah! His ADHD is massive too, so I see myself in Shaun there. That makes it comforting, as Shaun is so successful and a poetic genius. He even looks a bit like me. When Shaun came to the studio, I thought: ‘This is future me, isn’t it?’

“Shaun is from just up the road to me, in Little Hulton. The lads from my estate where I grew up in Leigh were enemies with the Little Hulton lads. We’d meet at a park to fight, so when Shaun came to the studio, I wasn’t sure whether to give him a hug or a right hook. I went for the hug.”

How did Boy George come to sing on ‘Let Me Down’?

“I was studying what makes a classic pop song, which involved listening to a lot of Culture Club and Boy George. I wrote ‘Let Me Down’, and it was obvious George should sing on it, so I hassled him on Twitter until he agreed to play the demo. Thankfully, he loved it.

“I told George about ‘Let Me Down’’s background, and he said: ‘Darling, there’s only one thing that makes a song a hit: repetition. If you play any song enough times to people, they’re going to love it.’

“George’s voice on ‘Let Me Down’ is chilling. I get goosebumps hearing it. I was supposed to sing the second verse, but George sang it all. I thought: ‘I can’t delete Boy George’s vocal and put mine on instead. Obviously not!’ I’m in the background somewhere instead.”

Who is the narrator on the three ‘self-help’ interludes?

“I’m not saying it’s not Stephen Fry. That’s all I can say on that.”

Is there anyone left on your bucket list for collaborations?

“I want to say Morrissey, but I’d have to have a stern chat with him first about some of his beliefs and morals, try to rewind him back to ’80s Morrissey. We had a great tour with Shed Seven, who’ve written so many indie anthems, so I’d love to write with their singer Rick Witter. And I really want to work with Jon McClure from Reverend And The Makers. I love him, and he’s so funny that I’d love to just spend a day in the studio with him. I’ve started writing songs I feel would work well with Jon, so he’ll have to help out on them, because I’ve already started the work.”

The Lottery Winners are a working class success story, but you’ve not had much mainstream attention. Why not?

“I think it’s because we’re just not very cool, and I’ve got no intention of pretending to be cool. I’m not bitter, but what music execs think is cool and what people really want? The only way we’ll get mainstream attention is by proving this is what people want, by selling all the tickets we do and selling all the records we do.

“I always knew we’d do it the hard way. We’re from a working class mining town in the north west of England. We’re not from London, we don’t have famous dads. We’re just trying our best, and if people connect to our music, that’s authentic.”

Did you ever try to be cool?

“Never. When we first started, we got invited to Blueprint Studios, where Elbow rehearse. One day, Johnny Marr came in. The Smiths defined me as a person, they taught me I’m not alone in how I feel. When Johnny walked in, I was a total fanboy.

“When Johnny was listening to our demos, I stood at the back of the room and secretly took a picture – and the flash went off. Quite rightly, Johnny gave me a bollocking: ‘Mate, you can’t just take pictures like that’. I was just heartbroken, but I saw Johnny in the studio corridor afterward and he gave me a big hug and some advice: ‘I really like what you do. Don’t try and change with the trends, do what you do and be authentic.’ Getting that advice made me think it was best to not change.

“I learned two valuable lessons that day: stay authentic to yourself. And don’t take pictures of Johnny Marr without asking first.”

The Lottery Winners release new album ‘Anxiety Replacement Therapy’ on April 28 via Modern Sky. The band also support Frank Turner in January and February, before embarking on a headline tour in April. The tour dates are below, with tickets available here.

For help and advice on mental health: