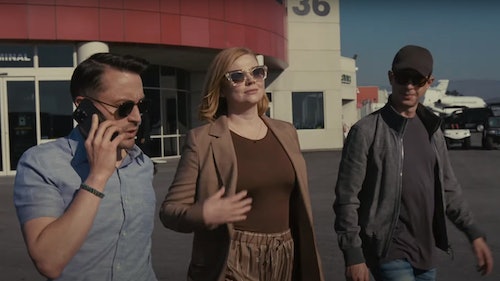 Succession was nominated more than any other show at the 2022 Emmys — which wasn’t much of a surprise to fans of the Roy family saga. Succession Season 3 earned critical acclaim and a healthy viewership, too, drawing in 1.4 million viewers for its October 2021 premiere (a 13% increase from the Season 2 premiere, according to Deadline). A fourth season was confirmed before most of the third had even aired — which, again, is not surprising.

It’s been over a year since our favorite family was on our TVs and you may be wondering: when is Succession Season 4? Fortunately, production on the next installment is well underway and HBO has confirmed a Spring 2023 release. Here’s everything we know about the Emmy darling series so far, including the cast being pictured filming what appeared to be a funeral scene in New York City, and what Cousin Greg has to say about the next installment.

In the logline for Succession’s fourth season, HBO confirmed that the new season would be 10 episodes long, one more than Season 3’s nine episodes. It also teased how the sale of Waystar Royco to Matsson will have a “seismic” effect on the family and those closest to them. As Season 3 left viewers with the Roy family once again divided, this new deal may cause more derision among the power-hungry siblings and their ruthless patriarch. It seems like the new season will really put the family and its corporate empire to the test, which has led fans to question if Season 4 will be the show’s final season.

“I think the maximum would be five seasons, but possibly more like four,” writer and executive producer Georgia Pritchett told The Sunday Times of Succession’s future in June 2021. “At this point [showrunner Jesse Armstrong] is saying only one more [season]. But that happens every time. We’ve got a good end in sight.”

Speaking to The New Statesman in September, Armstrong said that “there’s going to be a very definite moment when [the] story is over.” However, he told Variety in October 2021 that he hadn’t yet reached that point. “I don’t want to say. I don’t have a good definitive answer to that,” he said when asked when the show might end. “All I know is there’s a promise in the ‘Succession’ title, and it can’t go on forever.” He added that he has some idea of how he wants to conclude the series but that it could change. “It’s important for me, I think, as a showrunner to have a pitch for my fellow collaborators, especially the writers. But it’s not immutable. That’s up for discussion.”

Succession star Brian Cox, who plays patriarch Logan Roy, echoed Pritchett and Armstrong in an October 2021 interview with British GQ: “I would say possibly two more [seasons] and then I think we’re done. But it just depends and may just be only one more [season]. It depends what the writers feel. I know they’ve got an endgame.”

On Jan. 9, 2023, the cast and crew of Succession were spotted on the Upper East Side of New York City filming an apparent funeral scene. Characters Logan, Kendall, Greg, Connor, and Hugo were all spotted in suits and ties, wearing glum expressions, but three characters were noticeably absent from the proceedings — Tom, Shiv, and Kieran.

Hopefully, this doesn’t mean that something sinister is afoot in Season 4 but judging by the look on Logan’s face, it may be something important. And Armstrong did say that there would be a “very definite moment” to mark when Succession’s story nears its close. 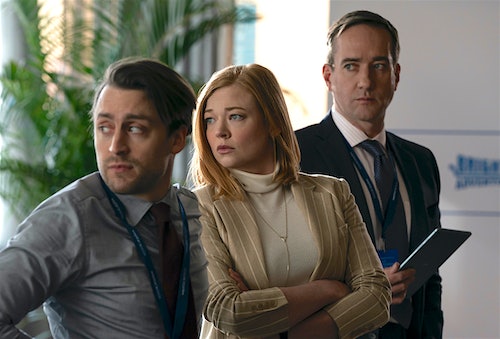 Right before the House of the Dragon finale on Oct. 23, HBO unveiled a sneak peek at the upcoming season and finally confirmed when fans could expect Succession Season 4: Spring 2023. The cable network has yet to reveal an exact date that we’ll be reunited with the tumultuous Roy family again.

Season 4 production began in New York on June 27, the network confirmed per The Wrap. Season 3 started production in November 2020 and ultimately premiered the following October — so it makes sense for Season 4 to drop in Spring 2023.

Braun and Skarsgård summed up the new season in one word during a Sundance Film Festival interview. “Banger,” Braun said when asked at The Hollywood Reporter Studio at the annual Utah-based festival, receiving laughs from the audience. “Absolute banger. Fire season.” Skarsgård, meanwhile, chose a more mysterious word: “manicured.”

On Oct. 23, Succession revealed its first look at Season 4 in a minute-long teaser. Picking up on the aftermath of Logan’s heart-shattering decision to sell the company, the trailer briefly touches on the different characters and storylines of the new season, including the state of Shiv and Tom’s marriage.

The teaser ends with Tom asking Shiv whether she wants to “talk about what happened,” most likely referring to the aftermath of him letting Logan know about his children’s plot against him.