But Saka, 21, bagged a double and sub Rashford scored seconds after coming off the bench to bury their Wembley agony.

Arsenal star Saka said: “The miss is a moment that will be with me forever. I’m so blessed and so grateful to feel that love from everyone around me. Not only with Gareth and all the team with England.

“Also at Arsenal, and my friends and my family, who put their arm around me, and the love of my team-mates as well who supported me and helped me get back into a good place.

“It gives me a lot of confidence and belief in myself to go again.

“So every time I have the chance to pull on an England shirt I give 110 per cent and do my best to make the nation proud.

“I can’t describe the feeling. I am so happy and so proud. We got the win as well, so it is a really special day.”

Captain Harry Kane revealed his disappointment after being blocked from wearing the “One Love” armband by Fifa on Sunday morning following a threat the striker would be booked if he did so.

On the pitch, England rattled up their best opening win at a World Cup finals. 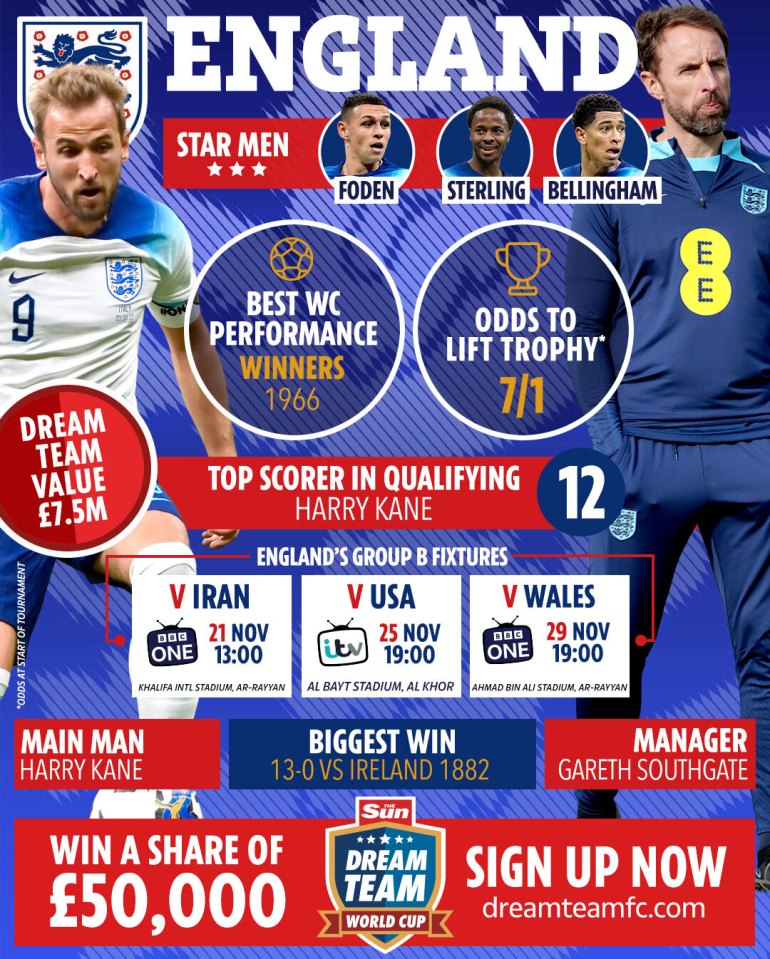 Jude Bellingham, Saka and Raheem Sterling made it 3-0 by half-time.

Saka, Rashford and Jack Grealish all netted after the break.

Gareth Southgate was pleased with the victory but branded himself a “a miserable so and so” after Iran’s Mehdi Taremi netted twice, including a stoppage-time VAR penalty.

And the England boss fired a warning that his men must improve to go deep in the tournament.

Southgate said: “I am a miserable so and so. I should be more excited but I need to keep the team on the right track and we need to be better.

“To win by that margin and play as we did for the majority of the game, you have got to be really happy.

“We looked ready, we used the ball really well and our attacking threat was there for everyone to see. It’s a great marker to put down.

“But I didn’t like the end of the game. To concede two goals isn’t the level that we need. We looked sloppy.

“We had 24 minutes of added time across the game and it is a long time to focus and we just lost concentration. When we play at a slow tempo we are nowhere near as effective.

“I’ve said to the players I have to balance how I feel because we dominated the game and there were so many good performances. But equally we cannot concede two goals in the manner we did.

“We are going to have to be better than we were today in certain aspects of our game against the USA because they are going to be coming for us full throttle.”

Southgate confirmed Kane should be OK to face the US on Friday after he was pictured limping away from the stadium with strapping on his right ankle.

And Harry Maguire also expects to be fit for the American clash after he tweeted: “I felt unwell in the second half so came off as a precaution. Looking forward to Friday.”

England were bemused by the award of Iran’s late penalty for John Stones’ tug on Morteza Pouraliganji, especially after Maguire was denied a spot-kick early on at 0-0 when he was clearly manhandled in the box.

Southgate added: “We are intrigued to know because we had a meeting the other day where it was made very clear what would be given as a penalty and we didn’t get one and then had one given against us at the end.”