TWO people were killed in a frenzied knife attack by a refugee who had been released from prison a few days ago.

Three of the injured are said to be fighting for life after the 33-year-old suspect began attacking passengers, sparking panic on board the train in Germany.

A major emergency service response has been scrambled[/caption] 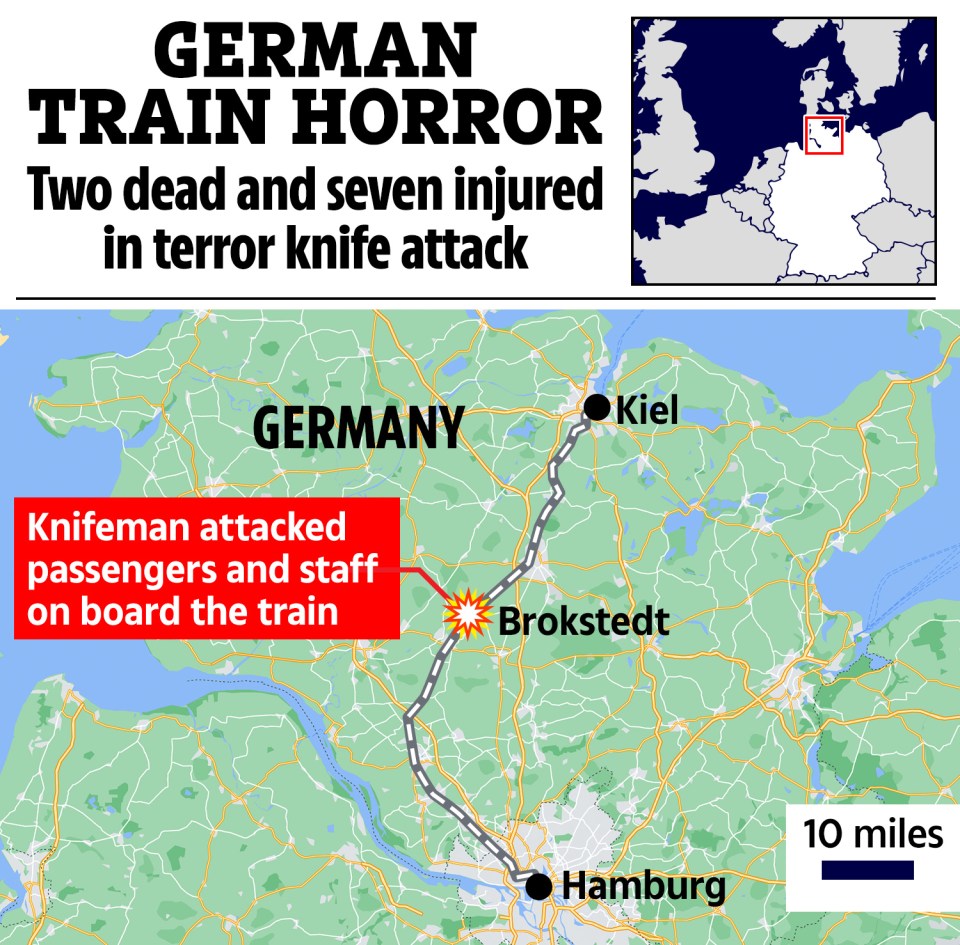 The horror attack took place on board a train between the northern cities of Hamburg and Kiel.

An enormous police and emergency service operation was launched in the town of Brokstedt, 30 miles north of Hamburg.

One eyewitness said he saw blood traces in multiple carriages after the attack, which happened at 3pm local time.

The interior minister of the German state of Schleswig-Holstein Sutterlin-Waack was a stateless Palestinian who had been in prison until a few days ago.

“It’s really terrible. We’re really shocked and appalled that something like this happened,” she said.

Regional broadcaster NDR, citing sources on the investigation team, reported that the man, who came from Gaza eight years ago, had a criminal past.

The suspect has convictions going back to 2015 for theft, shoplifting, assault and sexual assault and was only released from jail on January 19, Bild reports.

The incident is so far not being treated as terrorism, German police have said.

Train passenger Christian Götzner said he was “scared to death” when man went when the man appeared in carriage.

Another man at Brokstedt station said that his daughter called him from the train saying that she and other passengers had to leave the train “because someone stabbed them with a knife”.

The regional train was travelling between the two cities when the knifeman started attacking passengers, seemingly at random.

An eyewitness told German news site KN-online that people in his carriage panicked after three girls rushed in and reported that a man with a knife was on the train.

Police have arrested one man over the fatal attacks.

According to reports, he had self-inflicted injuries to his hands when he was arrested.

So far, the suspect’s motives are unknown and Brokstedt train station remains cordoned off.

At least three of the seven injured are in a serious condition, reports German news outlet Der Tagesspiegel.

The German train company Deutsche Bahn confirmed that the route between Brockstedt and the town of Wirst has been closed off and a rail replacement service is running.

Long-distance train routes have also been cancelled in the wake of the attack.

Brokstedt is a small community of just 2,000 people around halfway between Hamburg and the port city of Kiel, on Germany’s Baltic Sea coast.

Germany has been hit in recent years by several deadly knife attacks, some carried out by extremists and others by people suffering from serious psychological problems.

A Syrian jihadist was given a life sentence in May 2021 for stabbing a German man to death and severely wounding his partner in a homophobic attack in the eastern city of Dresden.

In December, a German court sentenced a Syrian-born man to 14 years in prison for an Islamist knife attack on a train in which he injured four passengers.

Last year a German court committed a Somali man to a psychiatric hospital after he stabbed three people to death in the southern city of Wuerzburg in 2021.

The suspect, a Syrian national, has been arrested[/caption]

The attack happened in the town of Brokstedt, near Hamburg[/caption]