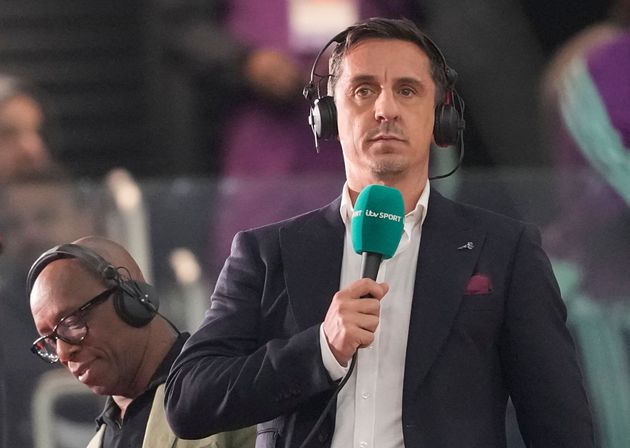 Ofcom has announced it will not be pursuing complaints made about Gary Neville during last year’s World Cup coverage.

More than 700 people complained to the TV watchdog after Gary criticised working conditions in both Qatar and the UK while fronting ITV’s coverage of the 2022 World Cup final.

He said at the time, while presenting from Qatar: “We should detest low pay, we should detest poor accommodation and poor working conditions. That is something we can never, ever accept that in this region or in any region.

“And it is just worth mentioning we’ve got a current government in our country who are demonising rail workers, ambulance workers and – terrifyingly –  nurses.”

“In our country we’ve got a Government who are demonising rail workers, ambulance drivers and nurses”

masterful punditry as ever from Gary Neville 👏 #WorldCuppic.twitter.com/k1o2wWAEsy

At the time, prime minister Rishi Sunak condemned Gary’s remarks, with a total of 705 people complaining to Ofcom.

In a statement, the media regulator said: “We considered these complaints against our broadcasting rules. In our view, the live, brief and unscripted remarks about industrial relations in the UK came amidst a wider discussion about the policies and actions of the Qatari Government, which gave due weight to a range of views. So, we will not be pursuing these complaints further.

“However, we have issued guidance to ITV reminding them of their due impartiality obligations. ITV has assured us that presenters and studio guests will be reminded of these rules.”

An ITV spokesperson previously said: “Gary Neville was expressing his own personal views in the context of a discussion about treatment of workers in Qatar within a live broadcast. His views are his own and were not endorsed by ITV.”

Prior to the World Cup, Gary was met with some criticism about accepting a role presenting from Qatar, which he was confronted about during an appearance on Have I Got News For You late last year.