Netflix is defending conditions on the set of its new Squid Game: The Challenge reality series.

Earlier this week, The Sun reported that some contestants required medical assistance while filming a game of Red Light, Green Light in sub-zero conditions during an ongoing cold snap in the UK.

In the game – as was previously seen in the 2021 Netflix drama – players are required to progress toward a finish line but remain still while a camera (hidden behind the eyes of a massive creepy robotic doll) is facing them.

One contestant who spoke to The Sun described “warzone conditions” during the series’ first day of production on Monday.

Variety later reported that “fewer than five players” had received medical assistance on set, including one who injured their shoulder after accidentally running into a wall. The rest were treated for “mild ailments,” according to the outlet.

The new reality game show features “456 real players” who “will enter the game in pursuit of a life-changing reward of $4.56 million,” according to a Netflix press release.

“As they compete through a series of games inspired by the original show — plus surprising new additions — their strategies, alliances, and character will be put to the test while competitors are eliminated around them,” the release reads. 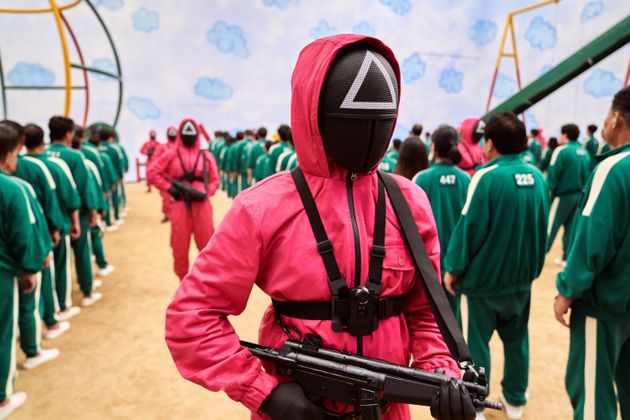 One player told The Sun that participants endured harsh conditions to secure the mega prize.

“Even if hypothermia kicked in then people were willing to stay for as long as possible because a lot of money was on the line. Too many were determined not to move so they stood there for far too long,” the contestant said.

The player continued: “People were getting carried out by medics but we couldn’t say anything. If you talk then you’re out. Some people couldn’t move their feet because it was so cold.”

Netflix denied to Variety that people had to be taken off the set in stretchers, as other outlets had reported.

“While it was very cold on set — and participants were prepared for that — any claims of serious injury are untrue,” Netflix and series co-producers Studio Lambert and The Garden told the outlet.

“We care deeply about the health and safety of our cast and crew, and invested in all the appropriate safety procedures,” the statement read.

Netflix did not immediately reply to HuffPost’s request for further details.

Set in a dystopian society, the original Squid Game series portrays a secret contest where 456 players, all of whom are cash-strapped, risk their lives to play a series of deadly children’s games for the chance to win a grand prize. The losers of each round are executed until just one champion remains.

The dark Korean drama made history last summer by becoming the first non-English series to be nominated for multiple Emmys. It was officially renewed for a second season on the streaming titan in June.