How To Watch ‘Everything Everywhere All At Once’ In The UK 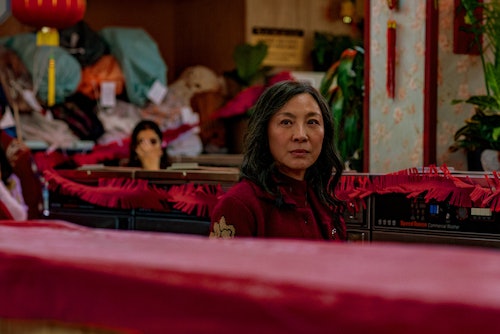 When the trailer for Everything Everywhere All At Once first debuted in December 2021, no one was expecting the multiverse implications of a laundromat owner being audited by the IRS. Starring Michelle Yeoh, Ke Huy Quan, and Stephanie Hsu, the film sees Evelyn Wang (Yeoh) discover that she must connect with and embrace the skills of versions of herself in other parallel universes to save the world.

Written and directed by Dan Kwan and Daniel Scheinert, who go by the moniker Daniels, this visual rollercoaster of a movie has since become a huge indie sleeper hit, and now leads the 2023 Oscar nominations with an impressive eleven nods. As well as being up for Best Picture and Best Director, Michelle Yeoh, Ke Huy Quan, Jamie Lee Curtis and Stephanie Hsu have all been recognised in acting categories. Yeoh’s nomination for Best Actress is particularly historic, and if she wins, she will become the first Asian actor to triumph in the prestigious category. She’s also only the second Asian woman to be nominated for Best Actress in the history of the awards. Though an Asian woman has been nominated once before – back in 1935 – nominee and The Dark Angel star Merle Oberon concealed her South Asian and Māori heritage during her career.

Fancy watching one of last year’s most lauded films ahead of the March 12 Oscars ceremony? Here’s how to watch Everything Everywhere All At Once in the UK, and what you can expect from the film.

When Is Everything Everywhere All At Once Out In The UK?

The critically acclaimed film initially premiered in the States on Mar. 25, 2022, with Kwan finally announcing a UK release date for Everything Everywhere All At Once on Apr. 19. The film then hit our cinema screens on Friday, May 13, scooping a record-smashing $100 million (£81.2m) in the box office worldwide for A24, far outstripping the studio’s previous top-sellers Lady Bird, Moonlight, Uncut Gems, and Hereditary.

If you missed it in the cinemas, though, do not despair – Everything Everywhere All At Once has since made its way over to streaming services. Currently a free pick for Prime Video subscribers, viewers can also rent the film for a few quid (from £3.49 for the SD version, to be precise) from Google Play, Microsoft, YouTube, Rakuten, and Curzon – and all these platforms also offer slightly pricier options to permanently buy the film, too. It’s also available for just over a fiver on Apple TV, and seems to be returning to select independent cinemas in the run-up to the Oscars.

Everything Everywhere All At Once Plot

The story centres around Evelyn Wang (played by Michelle Yeoh), as she struggles to maintain balance in her life. Not only is her laundromat business being audited by the IRS, but she’s also in the midst of a divorce with her husband Waymond (Ke Huy Quan), as well as dealing with her daughter Joy’s (Stephanie Hsu) dating life.

When the pressure becomes too much, Evelyn is seemingly taken over by another personality. Going by the name Alpha, they tell Evelyn that parallel universes exist and that the people of these universes have developed technology that allows them to access the skills of their counterparts.

What follows is a symphony of bizarre, surrealist moments as Evelyn begins to learn these superhuman powers in an effort to prevent the multiverse from collapsing in on itself.

What Have Critics Been Saying About Everything Everywhere All At Once?

Described by The Guardian’s Lisa Wong Macabasco as “the year’s wildest movie,” Everything Everywhere All At Once is currently sitting with a Certified Fresh rating of 97% on Rotten Tomatoes. The general consensus of the film is that it’s living up to the hype, and is quickly becoming a must-watch.

While many have praised Michelle Yeoh’s performance, with Vanity Fair’s Maureen Ryan going so far as saying this is Yeoh’s “role of a lifetime,” some have criticised the film as being a little too much.

TIME Magazine’s Stephanie Zacharek describes it as being “too often frenetic only for craziness’ sake,” but echoed Ryan’s sentiment that Yeoh “anchors” the film, adding that Daniels deserves praise for creating “this kind of showcase” for the actor’s talent.