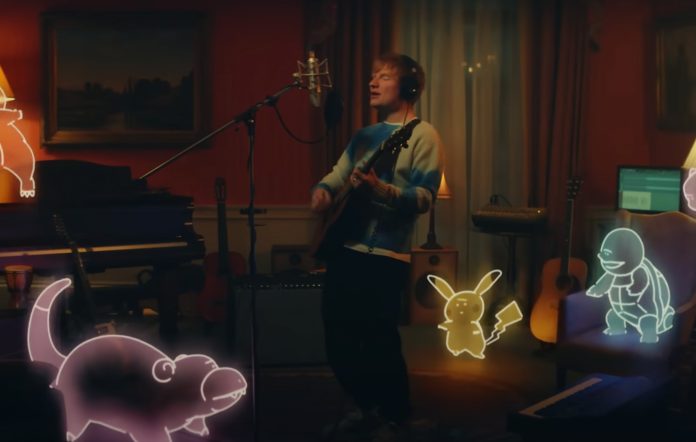 Pokémon has shared a new trailer for its upcoming games Pokémon Scarlet and Pokémon Violet, soundtracked by Ed Sheeran‘s recent song ‘Celestial’ – you can watch it below.

The new titles in the long-running gaming franchise are both due for release next Friday (November 18) exclusively on Nintendo Switch, as revealed over the summer. Announced back in February, the games will have a similar art style to the previous entry, Pokémon Legends: Arceus.

Sheeran, who’s a longtime Pokémon fan, dropped ‘Celestial’ in September in collaboration with the Japanese media company. The singer-songwriter later gave the single its live debut on The Late Show With Stephen Colbert.

Posting a new four-minute trailer for Scarlet and Violet on Twitter yesterday (November 8), Pokémon UK wrote: “Join forces with other Trainers from around the world to battle the mightiest Pokémon in Paldea!”

In a follow-up tweet, they added: “A journey of celestial proportions awaits. Thanks for the incredible track [Ed Sheeran]!”

The clip introduces fans to the forthcoming games’ new starter Pokémon – Sprigatito, Quaxly and Fuecoco – as well as the world of Paldea. Check out trailer and the announcement posts below.

Join forces with other Trainers from around the world to battle the mightiest Pokémon in Paldea!

A journey of celestial proportions awaits.

Thanks for the incredible track @edsheeran!

It comes after it was revealed that another new Pokémon, Gimmighoul, will make its debut in Pokémon Scarlet and Violet.

The character – which was first discovered in Pokémon Go recently, but was not catchable – will have one roaming form, and one where it can be found inside a coin chest. A description reads: “Introducing Gimmighoul, the Coin Chest Pokémon!”

In September, a trailer for Pokémon Scarlet and Pokémon Violet revealed more about the three different adventures that await players in the open-world game.

Ed Sheeran, meanwhile, talked about his long-standing love for Pokémon in a statement upon the release of ‘Celestial’, saying that he’s played the games “since I was in primary school”.

“Even though I’m 31 now, I still own the same Game Boy Colour and play Pokémon Yellow or Silver on planes and trains when I’m on tour,” he continued.

“It’s such an honour to add a song into a Pokémon game and shoot a nostalgic video too. I hope you guys enjoy the song and video – it was a blast to film!”

Madonna to celebrate 30 years of ‘Sex’ at Art Basel

Madonna to celebrate 30 years of ‘Sex’ at Art Basel

“There is a massive hole in our lives”: Family’s heartbreak after ‘precious’ little girl, 3, dies in horror crash on M6