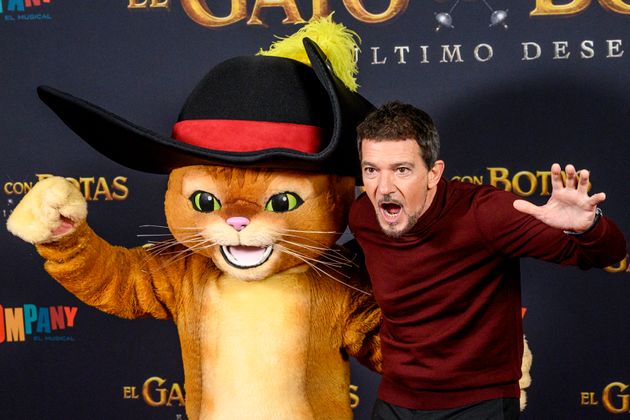 Antonio Banderas attends the Puss In Boots: The Last Wish photocall at Hotel URSO on December 20, 2022 in Madrid, Spain.

Antonio Banderas might be an Oscar-nominated acting legend, but to many people he’ll always be best known for voicing a certain animated swashbuckling ginger pussycat.

The Spanish star has now revealed that providing the voice for Puss In Boots, who made his on-screen debut in 2004’s Shrek 2, comes with a very particular problem for an in-demand actor.

As he gears up for the release of the feline character’s latest outing in Puss In Boots: The Last Wish, Antonio says playing the animated character has become “like riding a bicycle” but after five films and two TV specials, the same issue remains.

“Even if there was a gap of several years, it’s just like riding a bicycle,” Antonio told Radio Times. “The only problem that I had is a problem I actually had for the first movie.

“At the time I was on Broadway singing every night and had to do sessions for Puss in the morning. And because Puss is very loud, it just destroyed my vocal cords.

“And this time, the same thing happened! I was doing a musical here in Spain.”

Puss in Boots: The Last Wish, sees the heroic cat on the last of his nine lives and facing death in the face, something Antonio says he can relate to after he suffered a heart attack six years ago.

However, the 62-year-old insists the medical emergency was “one of the best things that happened in my life”.

“It was like putting glasses on and seeing what was important,” he explains.

“I came back to Spain and started looking at my professional life from a different point of view. So I do connect to it in a personal way. I think it’s a beautiful message, and I think it was done properly.”

Puss In Boots: The Last Wish comes to cinemas on 3 February.

Read the full interview with Antonio in this week’s Radio Times, out now.